Subscribe
Search
Menu
Follow us
This post contains affiliate links. Affiliate disclosure: As an Amazon Associate, we may earn commissions from qualifying purchases from Amazon.com and other Amazon websites.

Vegans are 7% happier than meat-eaters. Additionally, a person’s happiness is positively correlated to the likelihood of adopting a vegan diet in the future.

A new study performed by Tracking Happiness called ‘Eat Green, Be Happy: Evidence Of The Connection Between Veganism And Happiness’ found these correlations by analyzing 11,537 survey responses.

Key highlights from the study:

Happy people more likely to turn vegan in the future 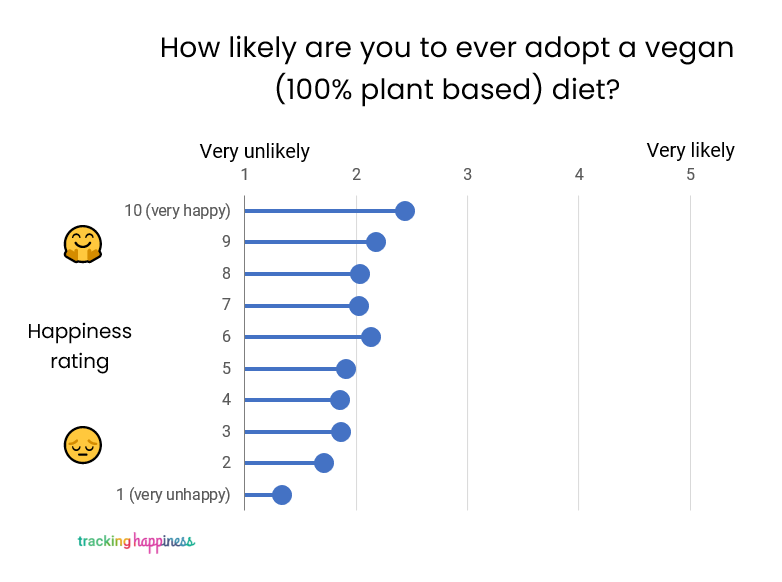 It was also found that age was inversely correlated with a person’s likelihood of becoming vegan.

Based on these results, it can be said that the world is slowly becoming more accepting of veganism. Young people consider themselves more likely to adopt a plant-based diet in the future, as well as happier people. Therefore, it can be assumed that the world will become more vegan as people slowly age and make room for new generations.

One of the authors of the study – Hugo Huijer – comments on the importance of discussing veganism as a topic:

We believe that happiness and sustainability go hand in hand. Sustainable behavior is linked to increased mental health, which is why it’s so important to talk about the consumption of animal products. Even though the positive environmental effect of veganism cannot be disputed, there is still a negative stigma surrounding people who claim to be vegan.

We landed on this study subject when we found that data on vegan stigmas and happiness is either lacking or outdated. And since it’s clear that people generally only change their opinions when faced with new data and facts, we want to provide a meaningful source of information that could stimulate this change. We sincerely hope that our findings help people make informed decisions regarding sustainability, happiness and the consumption of animal products.

It’s true that vegan stigmas have been around for a long time. Veganism and mental health are two polarizing topics. When it comes to the effect of meatless diets and mental health, there’s a lot of disagreement. Even in academic circles, studies are conflicting about veganism and mental health. There are studies claiming that veganism or vegetarianism is correlated to increased chances of depression. The linked study mentions “clear evidence” that shows vegetarians are more prone to depression, anxiety, and self-harm compared to meat-eaters. They found this by analyzing 18 previous studies that matched their filter criteria.

However, a randomized controlled trial within one of those 18 studies found that vegetarians reported significantly better moods than omnivores.

Another study – which also used self-reported mood levels – found that:

The People for the Ethical Treatment of Animals (PETA) came out with a comment on the study. Their Vice President of International Programmes Mimi Bekhechi found the results to be in line with PETA’s own philosophy:

It’s no wonder vegans are happier – by sparing animals atrocious suffering, helping to save the planet, and improving their own health, vegans can enjoy peace of mind and a clean conscience. If you want to join the happy v-gang, you’re in luck: going vegan has never been easier or tastier..

Francine Jordan – spokesperson for the Vegan Society also commented on the study:

We’re not surprised by these findings at all. We know that the image of veganism is undergoing the most radical change in its history, while shedding some tired, old stereotypes. It’s no longer portrayed as an unusual lifestyle, it’s easy and accessible – you can walk into any supermarket and be greeted by a huge range of plant-based products or walk into any restaurant and be presented with an exciting vegan menu. There has never been a better time to be vegan and it’s great to see that vegans are much happier too!

Get the best viral stories straight into your inbox!

Don’t miss out on new posts

Just so you know, Toast Fried may collect a share of sales from the links on this page.

Back to Top
Close